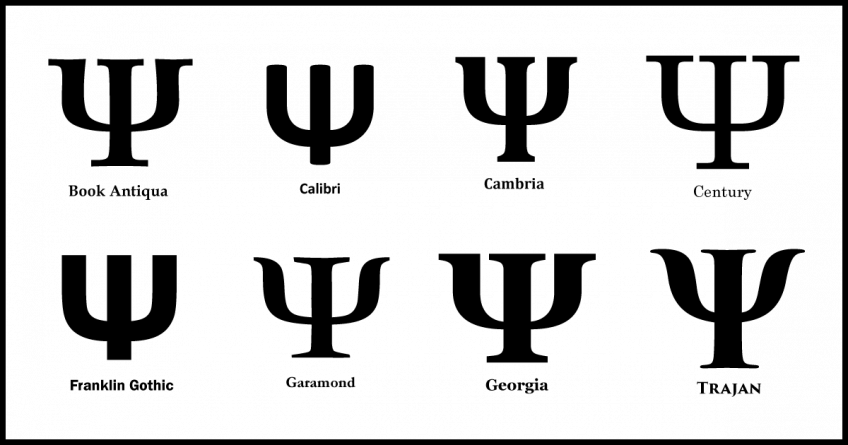 The symbol for psychology or psychology studies is Ψ, which is the Greek letter psi and the shape of a trident or pitchfork. The capital-letter version of psi (Ψ) is generally preferred over the lower-case psi (ψ).

About the Greek Letter Ψ and Psychology

Psi is the 23rd letter in the Modern Greek alphabet. Psi is also the first letter in the Greek word for psychology: Ψυχολογία. The root word ψυχή (‘psichy’ or psyche), means “life”, “soul”, and “heart” in Greek.

The origins of psychology can be traced back to the Ancient Greeks along with the Romans. Psychology and philosophy are intertwined disciplines. The Greeks proposed many theories and philosophies of the human mind.

Plato, Aristotle, and other ancient Greek philosophers examined a wide range of topics relating to what we now consider psychology.

The History of Psychology

Image Versions of the Psychology Symbol

Here are examples of three psychology symbol images that you can click to download and save. These are clear (transparent) png images 300px wide.

To type the psychology symbol, you can copy and paste the text Ψ on this page. You can also use the following text codes.

To type capital Psi in a Word document, just type the code 03A8 and then hit ALT + X. Works like magic.

Example Symbols in the Field of Psychology

If you’re a psychology major, a psychologist, or otherwise work in the industry, you’ll no doubt come across the psychology symbol in visual images. It can also be used as shorthand writing for the word “psychology”.

Generally, however, the “human mind” dominates visual imagery relating to the term psychology. See the examples above. A focus on the workings of the brain is appropriate because psychology refers to the scientific study of the mind and behaviour.